New Orleans circus performer Clay Mazing took his Emergency Circus troupe to the heart of the Syrian refugee crisis this past December and, for a few moments, made the lives of thousands of people a little brighter.

Now he wants to go back, and he needs a little help from his friends. His  “Emergency Circus Strikes Back” fundraiser on Saturday night (Feb. 13) at the Castillo Blanco Art Studios on St. Claude Avenue (home of the Intergalactic Krewe of Chewbacchus) seeks to raise funds for a springtime return to Europe where he hopes to bring a troupe of fellow performers to continue their work. That work began with a partnership through Clowns Without Borders, and the work never ends.

On Saturday night, the fun begins at 8 p.m. with an art-crawl led by Afro-Brazilian troupe BateBunda starting at Antenna Gallery (3718 St. Claude Ave.) and will pass through the traditional second-Saturday art crawl, down the boulevard and to the Castille Blanco for a big  dance party, art auction, and circus show featuring local and touring circus artists (including those from Cirque Copine and the recent “Vaude D’Gras” show at Happyland Theater.

What was the most rewarding aspect of the first trip that has inspired you to come back for a second tour of duty, so to speak?

Well, honestly when I first arrived I didn’t know how my clowning would be received by these people going through such unimaginable hardships. I mean, these people were fleeing war, walking for miles, spending their life’s savings, and losing loved ones. I didn’t know how they would feel about a foolish American clown showing up to make funny faces and play music. But as soon as I did the first show, as soon as I made that first smile, I realized how imperatively important this work was not only for the refugee children but for their parents, the other aid workers, my own soul, and for all my friends, family, and strangers back home who needed to know the hearts of these struggling humble folks.

What if any feedback did you get from relief or aid workers about your work? Did you have much interaction with “official”-type people who were dealing with this crisis?

The aid workers were always pleased to see us. It’s very hard on them to work with this constant surge of refugees who are mostly only there for a day or two while the aid workers have been dealing with death and hardship for months. It’s a magical feeling when you can get Syrian refugees, UNICEF workers from Norway, and Greek border police all laughing at the same pray fall. It proves we are all connected at the deepest level.

Let’s talk about your needs with the fundraiser. What kind of budget are you looking at for this trip? What are the cost breakdowns, if you can do so generally? What’s the plan and how much will it cost to go back again?

Our plan is to bring three circus performers along the entire refugee road from the Syrian border with Turkey to refugee camps in the Netherlands. We will be documenting the journey because I think it’s important for people to know what compels these refugees to make this journey, to hear their stories, and to realize how close we all are. Of course it costs a lot to do such an epic journey. Luckily I was offered a gig as a keynote speaker for a conference in Denmark on “play in difficult situations,” so they’ll be paying for my ticket but I’ll still need at least $5,000 for travel, room and board to bring three circus performers the whole way.

I know we won’t be able to raise all the money needed with this one fundraiser but I think part of the importance of this project is to raise awareness, especially after hearing some of the xenophobic rhetoric recently spread by some of our political leaders. I experienced first-hand how kind, sweet, funny and loving these excellent souls are, and I want to share that. I want to show the ways in which we are the same. I want to show that we all laugh in the same language. That’s why I’ll be sharing stories, videos, and pictures from my experiences between acts at the show.

What’s the name of the conference and which three other performers are joining you? And what’s the time frame of the trip?

The trip will go from April 13 until May 25. We’ll be joined by New Orleans performer Moniek de Lieu, who went on the trip last fall and has spent a lot of time here in New Orleans. We’ll bring other European-based artists as well and link up with local musicians and clowns in each area we visit. We’ve got great connections in Athens, Germany, and many places along the way. I’m really excited to be working with such amazing talent for this extravaganza. We’ve got BateBunda marching through second Saturday’s art galleries, with jugglers and circus artists reveling the whole way. The show includes some of the most famous artists currently pushing the envelope of bringing a new consciousness of love to American society, like “Americas Got Talent’s” Special Head; Joey Cook, the New Orleanian who just killed it on “American Idol”; and Matthew Silver, the incredibly viral Internet wild man — not to mention local favorites Nick Williams (Guglielmo), Chatty the Mime, Sam Aquatic, and of course Clay Mazing. 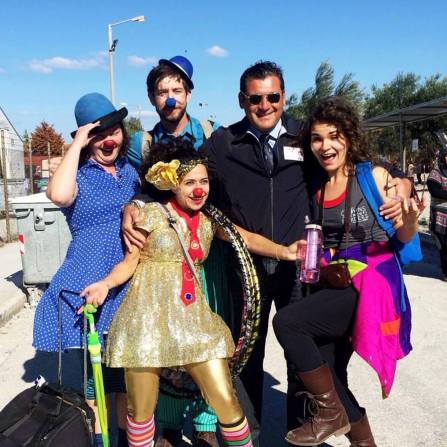 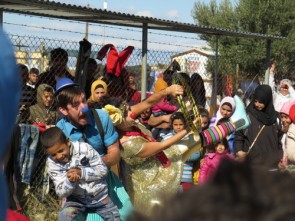 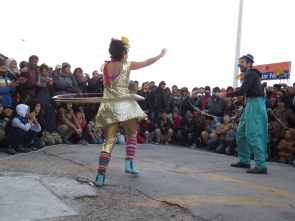 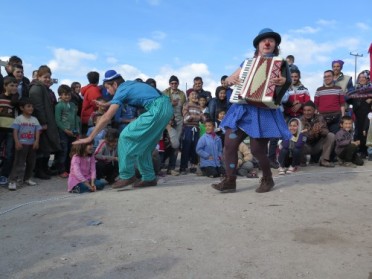 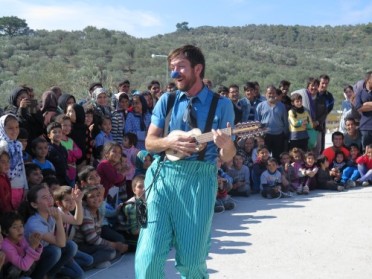 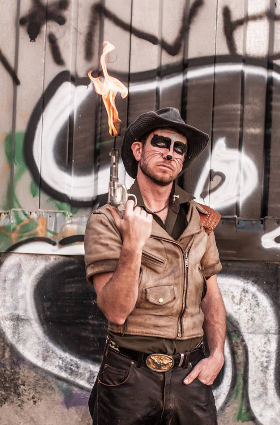 “If you’re in New Orleans you’re probably seeing more of the edgy Clay Mazing, the cowboy who’s cracking his whip, and with the flaming shotguns,” Clowns Without Borders’ Molly Levine says of Clay Mazing. “It’s fun crazy stuff. And when he is doing the Clowns Without Borders shows, he’s in character, but as a really child-friendly clown.” (Photo by Mike Shane)

Each month, New Orleans’ top circus and variety performers get together and showcase their latest works at the Fly Movement Salon over at Café Istanbul. But next week they’ll get a chance to showcase their work while supporting the very timely work of a fellow performer helping Syrian refugees.

Clay Mazing, known to some for his work at Cirque du Gras (which I covered here for NOLA.com) has taken his initial project work with the nonprofit group Clowns Without Borders in Greece and is continuing to perform with Syrian refugees as they continue on their journey. Right now he’s in Macedonia. And because now he’s supporting himself on the journey — working with his own troupe, the Emergency Circus — he needs some help, and his friends back in New Orleans are ready to go.

The next Fly Movement Salon, which will be held Tuesday (Dec. 1) at Café Istanbul, will feature performances by co-organizer Liza Rose (who I’ve also covered here) paired with Sarah Stardust, as well as David Chervony, Emily Chervony, Sami Smog and Golden Delicious, Penelope Little, and more to be announced soon.

Molly Levine, the director of the New York-based Clowns Without Borders, performed with Clay Mazing and a couple others during their project trip to the Greek island of Lesbos, which included 32 shows over 16 days for Syrian refugees who have already endured major hardship.

“If I could say one thing to my close friends, that I wish people would understand, is the sheer enormity of tis crisis,” Levine said. “The people who are arrive in Greece, these are middle-class people, they’re children, they’re old people, their families, and they’re coming knowing this is a dangerous trip for them. The choice for them in taking this trip often is between dying and maybe dying, and so they chose maybe dying, so they chose these trips.”

For Clay Mazing, it’s been an emotional and fulfilling journey.

“I feel so blessed to be following my dreams out here,” he said via message. “It’s obvious that people need this kind of empathy out here. When someone is starving and you offer an apple they take it hungrily. The same is true for people starving for joy. Some of these people (not just children) haven’t laughed in days because they are constantly moving through boats, tents, trains, and busses without knowing what’s next.

“It’s really this focused attention we give to them that they appreciate. The Red Cross and others give them blankets and tea but we provide some simple relief from the constant stress,” he continued. “And we all make instant friends. Tonight we all laughed and played music and danced around the fire. These friends are so damn full of love it’s insane. I don’t know how they keep it up honestly after being treated like cattle they offer their cookies and blankets to us.

“I’ve had so so many heartfelt hugs and deep eye contact thank-yous. There’s too much to say.”

(It should also be noted that Moniek de Leeuw of the Balcony Players also is performing, on violin, with Clay Mazing.)

Fly Movement Salon co-organizer Liza Rose has worked with Clay Mazing on several productions and sees him as a perfect fit for this kind of work.

“He is a delightful raconteur, a shameless ladies man, the penultimate poster boy for the Peter Pan complex … And he has, without a doubt, the shiniest heart of gold you’ll ever meet,” she said. “When he’s here, he spends a lot of his time arranging and performing shows for kids in hospitals, folks in nursing homes, at special needs schools, and wherever else it’s needed. As a sometimes guest performer with the Emergency Circus, I can tell you that it’s a special kind of thrill to bounce up in the Sh’zambulance (when stateside, the EC travels in a converted ambulance) and hear Clay on the megaphone saying, ‘It’s an Emergency Circus!'”

“And when he is doing the Clowns Without Borders shows, he’s in character, but as a really child-friendly clown. He does comedy,” Levine added. “He does slapstick. He loves to perform with the charango (a lute-like string instrument). The reason that Clay is the best performer to be doing this tour for the refugees he’s performing for is because, when he’s going, he never stops. If there’s a kid nearby, he’s always on. We’ll do two, three, four shows in the morning and be wiped out and will be going to lunch, but if he sees some children, those fake teeth will come on, and he’s performing again.”

Liza Rose echoed those sentiments: “He is doing what we all wish we could do, what we all think about briefly right before we think, ‘… but what about all this other stuff that will be hard and all the things I have to give up…?’ Clay’s not thinking about that. He’s living in the moment and using his talents to make a real change in the world, human to human. He should be a national fucking ambassador.”