Rivertown Theaters for the Performing Arts announces its upcoming seasons with all the “Let’s put on a show!” brio you’d come to expect from the most consistently popular producer of Broadway musicals. And so it was with Tony Award-ceremony grandeur, once again, that the company rolled out its 2016-2107 season Saturday (Jan. 9) with a reception and sneak preview in the venue, complete with co-emcees (and company partners) Gary Rucker and Kelly Fouchi, songs from upcoming shows, and a sneak preview of the upcoming “Sweet Charity.”

“How do you top last year’s most ambitious season of all musicals? You raise the bar again by presenting a season filled with different, unique, yet challenging and spectacular offerings to appeal to our extremely loyal and appreciative audiences who have supported, cheered us on, and grown with us over the past years,” Fouchi, co-artistic/managing director, said in a press release. “… We are thrilled with the support and response that we have received for each season’s offerings. Topping the ‘best of’ lists, each of the shows last year played to sold out houses and enthusiastic audiences.

“Our goal is to continue to present audiences with productions that are full of high entertainment value featuring some of the area’s most talented performers.”

At Saturday’s preview/fundraiser, which included an auction, the company recognized the contributions of “Volunteers of the Year”: Jane Hirling (Kelly Fouchi’s mother) and Kenner City Councilman Keith Reynaud.

Here is a breakdown of those productions, with descriptions provided by Rivertown Theaters:

“The Big Easy Buddies are back with an all new show! Since their crowd pleasing, sold out hit show “Under The Boardwalk” here at Rivertown Theaters, patrons continually request that we bring back The Buddies. So here they are kicking off our 2016-2017 season, and bringing their tight harmonies and slick choreography to your favorite doo-wop, Motown and rock ‘n’ roll hits, including classics inspired by the city of New Orleans. ‘The Buddies’ will again be joined by the dazzling ‘Big Easy Babes’ with their nod to the girl groups and diva anthems of the 1950’s and ’60’s. The great American Radio Songbook comes to life in a rollicking musical event that promises all the spectacle, excitement and extraordinary talent our audiences have come to expect. The Times-Picayune says, ‘The non-stop energy the quartet brings to the stage is positively infectious and makes the show a treat not just for those audience members who heard this music originally on jukeboxes at the malt shops. It is a night for the entire family to enjoy.’ ‘Let The Good Times Roll’ will have audiences smiling and singing along, proving that retro never sounded so new!”

“What better time to celebrate the birth of America’s independence than during an election year … and what better way than with a Tony Award winning musical set in 1776? The turning point in American history blazes to vivid life in our November musical offering, ‘1776.’ A funny, insightful and compelling musical with a striking score and legendary book, ‘1776’ puts a human face on the pages of history. We see the men behind the national icons: proud, frightened, uncertain, charming and ultimately noble figures determined to do the right thing for a fledgling nation. Step back in time and be inspired by our founding fathers as they attempt to convince Congress to vote for independence from the shackles of the British monarch by signing the Declaration of Independence. This uplifting musical will have you beaming with pride and patriotism.”

“Millions of fans … Thousands of standing ovations … 10 Tony Awards including Best Musical … this is ‘Billy Elliot The Musical,’ the spectacular show with the heart, humor and passion named Time Magazine’s “Best Musical of the Decade!” Based on the international smash-hit film and featuring a score by music legend Elton John, ‘Billy Elliot’ is an astonishing theatrical experience that will stay with you forever. Set in a northern English mining town, against the background of the 1984 miners’ strike, ‘Billy Elliot’ is the inspirational story of a young boy’s struggle against the odds to make his dream come true. Follow Billy’s journey as he stumbles out of the boxing ring and into a ballet class where he discovers a passion for dance that inspires his family and community and changes his life forever. Join us for this powerful story that has captivated audiences around the world. Contains adult language, PG-13.”

“This two-time Tony Award winner is currently enjoying a second run on Broadway and is in its 10th year of performances in London’s West End. The 39 Steps is a comedic spoof of the classic 1935 Hitchcock film, with only four actors portraying more than 150 characters, sometimes changing roles in the blink of an eye. The brilliantly madcap and gripping comedy thriller follows our dashing hero Richard Hannay, as he races to solve the mystery of ‘The 39 Steps,’ all the while trying to clear his name! This ‘whodunit, part espionage thriller and part slapstick comedy’ is great fun for everyone from 9 to 99. The show’s uproarious fast pace promises to leave you gasping for breath … in a good way!”

“Before Beatlemania, before Beiber Fever, came hip-swingin’ teen idol Conrad Birdie (loosely based on Elvis), who, to the dismay of his adoring fans, is about to be drafted into the army by Uncle Sam. In Bye Bye Birdie, the 1950’s rock-n-roll musical comedy, Birdie’s agent, Albert and his secretary/girlfriend, Rosie, cook up a plan to send him off in style. They must write Birdie a new hit song and have him bestow “one last kiss” on a lucky fan, live on the Ed Sullivan Show. A town full of colorful characters including crazed teenagers, a jealous boyfriend, and a spotlight stealing father make for a rollicking good time. In addition to the popular silver screen adaptation starring Ann Margaret, Bye Bye Birdie is a Tony Award winner for Best Musical and features such beloved songs as ‘Put on A Happy Face,’ ‘Kids,’ ‘The Telephone Hour’ and ‘A Lot of Livin’ To Do.'”

“Based on the Disney animated film, the hit Broadway musical, and one of Hans Christian Andersen’s most beloved stories Disney’s ‘The Little Mermaid’ is a hauntingly beautiful love story for the ages. In a magical kingdom fathoms below, we meet Ariel, the little mermaid who is tired of flipping her fins and longs to be part of the fascinating world on dry land. Joining her are Sebastian, Ariel’s crabby sidekick; Ursula, the evil sea witch; Triton, King of the Sea and the handsome and human Prince Eric. Dive on in! Life is the bubbles, under the sea! Reserve the best seats early for your little guppies, our summer family shows sell out quick!” 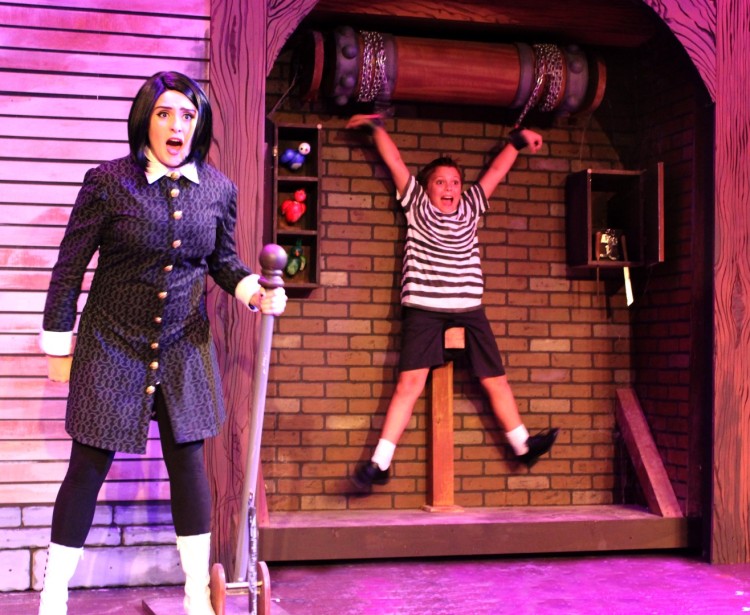 Dropping by Rivertown Theaters for the Performing Arts on a recent weeknight for a run-through of “The Addams Family” offered an opportunity to catch the cast going through the paces and working on the songlist for the show, naturally. I only had time to catch most of the first half while recording interviews with director Gary Rucker and Trina Beck (Morticia). (Check out the podcast interview with Rucker here.)

It also offered the chance to catch young Madison Kerth perform one of the show’s early numbers, “Pulled,” and while this is obviously a rehearsal (you can hear Rucker piping in directing notes from the back of the auditorium), it nevertheless hints at what could be a really fun performance by Kerth. A senior at the New Orleans Center for the Creative Arts (NOCCA), Kerth gets around. She’s already performed in several location productions and earned 2009 Big Easy and Storer Boone nominations for her performance in the title role of a touring production of “Annie.” (Check out her list of performances here.) Not only did she perform with the NOCCA vocal students at this past New Orleans Jazz Fest (watch the video), but she also appeared in a little fashion spread with some of her fellow students this past July in the New Orleans Advocate.

So check out the video below of her rehearsing “Pulled.” For more details on “The Addams Family,” click here. 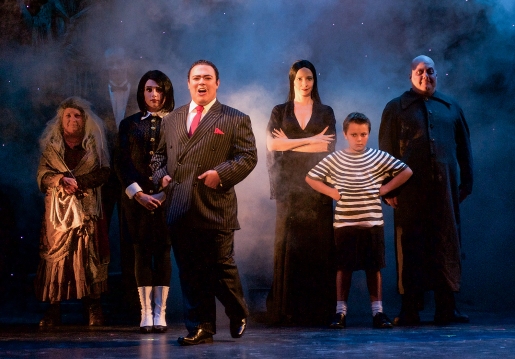 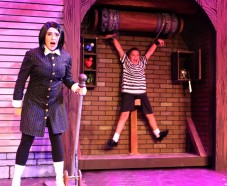 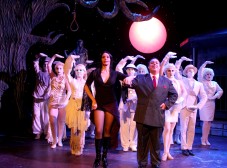 Very excited about being given the opportunity to contribute to the New Orleans Advocate, which starts in Thursday’s (Nov. 5) Beaucoup section with three — count ’em, three — features spanning a nice little spectrum of entertainment.

But the most exciting opportunity of all was a chance to preview Rivertown Theaters’ production of the Broadway musical adaptation of “The Addams Family,” directed by Gary Rucker and starring Trina Beck as Morticia and Johnny Lee Missakian as Gomez.

While I was working on the feature I got a chance to interview both Gary Rucker and Trina Beck about the musical, which has an interesting history and required a pretty shrewd production strategy. Check out this podcast of the interview with Rucker (below). I’ll have the Trina Beck interview up later today, hopefully.

Also check out my previews of the 26th Mirliton Festival in Bywater, and “Sesame Street Live” at UNO Lakefront Arena.