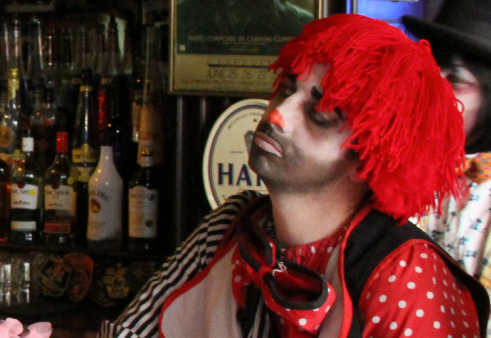 Full disclosure: I got my ass kicked by a gang of mean clowns on Lower Decatur Street. I had it coming; I’d asked Richard A. Pomes of The NOLA Project if I could come down and watch the extremely talented Mason Wood produce the trailer for the theatrical troupe’s latest offering, Adam Szymkowicz’s “Clown Bar,” a bizarro comedy with more than a passing reference to “Goodfellas.” The comedy opens Wednesday (Oct. 21) at the Little Gem Saloon, and for the trailer, Wood, Pomes and a whole mess of clowns filmed the trailer inside and near Molly’s at the Market. Pomes asked me if I’d like to be in it, taking a pie in the face from a clown, but instead logistics dictated I get assaulted on the sidewalk by this roving band of clowns.

Call it immersion journalism. But also call it yet another clever approach to theater from The NOLA Project, which constantly keeps audiences guessing what and where will come next. In Szymkowicz’s story, a clown turned detective must revisit his roots to investigate the murder of his brother. And that allows the audience to explore the darker nature of clowns, which long has transcended the Big Top and into popular culture. It seems like we talk about how much we fear clowns as much as we do laugh at them. (Sometimes both.)

So I asked NOLA Project regular Keith Claverie to serve up his top five favorite clowns through the years, and here’s what he came up with. (P.S. Click here for show details.)

Paul Beaumont, “He Who Gets Slapped” — “In preparation for ‘Clown Bar,’ I tried to study up on clowning and clowns, in general. Who better to research than the man of a thousand faces, Lon Chaney? I caught Chaney’s silent classic ‘He Who Gets Slapped’ on TCM and was blown away. What Chaney was able to do, the emotions he was able to convey, with just a frown or — even sadder in several instances — a smile, is incredible. He is not your ordinary clown, but rather a brilliant scientist who’s life (and wife) is stolen from him so he becomes a sad clown that gets slapped to make people laugh. No spoiler alerts here, but it doesn’t end well for ‘He’ … or anyone else, really.”

Krusty the Clown, “The Simpsons” — “I’m not quite as big of a Simpsons fan as Artistic Director A.J. Allegra (or my wife/’Clown Bar’ makeup designer Leslie Claverie), but I’ve watched enough to know Herschel Shmoikel Pinchas Yerucham Krustofski, aka Krusty, is a gem. He’s dirty, dark, twisted, not what you’re expecting — everything you love about ‘The Simpsons.’ He’s a clown, sure, but he’s a bit off. Similar to the patrons of our ‘Clown Bar’ (shameless plug). Plus, that Krusty laugh — it’s just the best!.

Homey D. Clown, “In Living Color” — “Sticking with the ‘clowns that area bit off’ theme, we have Homey D. Clown — an ex-con who works as a clown as part of his parole. As if the premise wasn’t funny enough, Damon Wayans crushed it as an angry Bozo-lookalike who habitually smacked children with a sock, spoke out against ‘The Man’ and uttered his now-famous catchphrase “Homey don’t play that!” Homey’s attitude and his insistence on not doing standard clown gags is what made him so hilarious. Well, that and the sound the sock made when it hit people. Dude was popular, too — there were Homey action figures, balloons and even a video game!”

Twisty, “American Horror Story: Freak Show” — With the lack of Pennywise on this list, you can probably tell the ‘scary’ clown is not my preferred clown of choice. But I make an exception for Twisty. This burly bastard was truly terrifying on ‘American Horror Story’s’ fourth season (‘Freak Show’). He stalked … everyone for seemingly no reason. And finding out ‘what is behind the mask’ was one of the greatest storylines of the season. Once the mask came off, it was pretty gross — and, unfortunately, not nearly as scary anymore. Don’t tell Twisty I said that!”

Pagliacco — “The OSC (Original Sad Clown)! Pagliaccio (real name Canio) is the tragic character of Ruggero Leoncavallo’s opera ‘Pagliacci.’ And, man, is he tragic. While playing a Commedia character whose lady steps out on him in a play within the opera, Canio’s lady actually steps out on him. In the most iconic scene, Canio loses it while preparing for a performance singing ‘Vesti la giubba’ (‘Put on the costume’). I had heard the tune before, but when I saw the New Orleans Opera production in 2012 at the Mahalia Jackson Theater (featuring my sister, Kathryn Matherne!), I was blown away. I’ll never forget it. Plus, it’s like the shortest opera ever … soooo, bonus!”

BONUS: “Killer Klowns from Outer Space” — “These dudes (read: aliens in the form of clowns) are just ridiculous. Not especially scary – except for the whole cotton-candy cocoon thing – but definitely silly. The rock anthem that plays as they prepare to terrorize the town is forever ingrained in my brain.”

2 thoughts on “For ‘Clown Bar,’ Keith Claverie describes the ‘makeup’ of his top 5 clown characters”