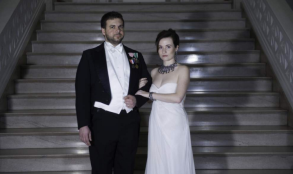 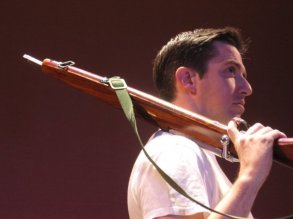 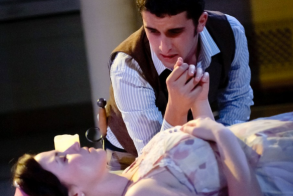 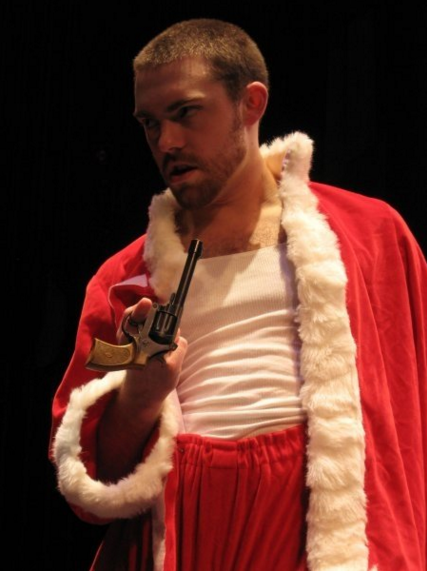 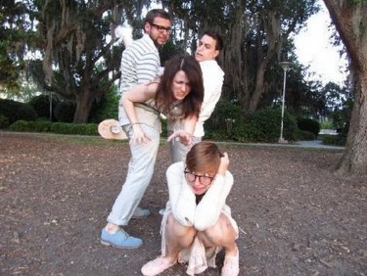 One of The NOLA Project’s many strengths is its ability to place several shows in a physical context with its site-specific productions. While the company stages perfectly fine shows in traditional venues (think the recent “Marie Antoinette” at NOCCA), there’s something to be said for a theater company being a little on the rootless side. While other theater companies might lament the lack of a permanent home, The NOLA Project plays it fast and loose — and sometimes fancy-pants, given the location of its next production.

“Our mission clearly states that we’re committed to ‘innovative performances.’ For us, as theatre professionals, we’re not here to simply mimic what’s come before us. Because that’s boring. We want to change the way people think about theater,” said company member and Marketing Director Richard A. Pomes. “It doesn’t have to be audience on one side and actors on a stage. To us, that traditional proscenium style of theatre has its place when the production calls for it. But we live in an age where people are constantly immersed in interactive entertainment. We’re in an age of iPads, video games, and theme parks where people expect a new level of attention grabbing excitement. On top of that, we’re in New Orleans where every weekend is a festival, a sporting event, Mardi Gras, concerts, and more.

“And despite what you think about these kind of outings, they aren’t spectator events,” he continued. “Theater in New Orleans doesn’t compete with other theatre. It competes with our audience saying ‘Hey, it’s Friday night. What do you want to do tonight? Basketball game? Kermit Ruffins? Movie?’ Etc. Both from a creative perspective and a marketing perspective, we have to constantly push the envelope to engage our audience in new, exciting ways. Something I hear often at our site-specific productions is: ‘I don’t go to a lot of plays. But this is great.'”

As it has done in the past, the company will stage one of William Shakespeare’s last written works, “The Winter’s Tale,” inside the New Orleans Museum of Art’s Great Hall. (Check out the Facebook event page.) On the eve of the show’s run (Dec. 1-20), I asked Pomes for the company’s top five locations over the years.

Little Gem Saloon — “The newest NOLA Project venue on this list is the Ramp Room, upstairs at Little Gem Saloon on Poydras. If you’ve never been to Little Gem, check it out. It’s a snazzy little restaurant and bar that features great live music acts. The Ramp Room is where we performed our second show this season, ‘Clown Bar.’ (Read the review here.) One of the most distinct productions in our company’s history, ‘Clown Bar’ required a unique venue. The script tells a film noir inspired story about the seedy underbelly of the organized clown crime world, orchestrated by clown crime boss and bar owner, Bobo, and the show’s playwright, Adam Szymkowicz, suggests (nay, demands) that the show takes place in a real bar. Actors in full clown regalia performed the script not only on a small stage built for a jazz quartet, but also throughout the rest of the bar, weaving between cocktail tables and muscling people out of the way at the bar to order a drink. Although for me, the best part was using audience members for cover during shootouts.”

The Sydney and Walda Besthoff Sculpture Garden at the New Orleans Museum of Art — The NOLA Project’s relationship with the New Orleans Museum of Art goes way back. One of our earliest performances was a 2006 production of ‘The Misanthrope’ in NOMA’s lecture hall/auditorium that most people don’t know exists. Several years later I, was chatting with their then-marketing gal, Grace Wilson, who mentioned she was thinking about doing a concert series in the Sculpture Garden. I blurted out, ‘What about Shakespeare?’ (As if those two things were somehow interchangeable.) Suddenly we’re performing ‘A Midsummer Night’s Dream’ for standing-room-only crowds. They were standing-room-only because director (and NOLA Project founding artistic director) Andrew Larimer designed the production as an immersive experience in which the audience would get up and move from location to location for different scenes. If you know ‘Midsummer,’ you know that as the story progresses our heroes go deeper and deeper into a forest, get lost, and then reemerge for a double wedding celebration (sorry, 400-year-old spoiler alert). And so our audience quite literally followed the heroes deeper into the garden to find out what happened next, stumbling across characters hidden in the scenery along the way. Since ‘Midsummer,’ we’ve performed more Shakespeare in the garden as well as original takes on ‘Robin Hood’ and ‘Alice in Wonderland.’ But that production of ‘Midsummer’ will always be our favorite. There’s something about performing Shakespeare under the stars that’s really magical.”

Le Petit Theatre du Vieux Carré — The only traditional theatre space you’ll find on this list is the crown jewel of the New Orleans performing-arts community: Le Petit Theatre du Vieux Carré. Full disclosure: I grew up performing at Le Petit (both on the main stage and the “now-a-restaurant” children’s corner theater), so I have a bit of a soft spot for this place. When The NOLA Project started, we were the new, wet-behind-the-ears, kids on the block. After a few successful shows, we had to up the ante. The clout and credibility we needed as an independent theater company came in the form of a residency at Le Petit. During our time there, we planned and executed our first traditional theatrical season. This included a wide array of shows such as a children’s show filled with pop-culture references and puppets, a drama about jazz musicians, a dirty late-night adult drinking-game parody of nursery rhymes, an original piece about the New Orleans public school system, a Sondheim musical about assassinating presidents, and more. Le Petit let us do the kind of theater we wanted to do at a time when our youth and inexperience would’ve easily allowed them to tell us no. Not all of those shows were hits. But our time at Le Petit was an integral part of our growth as a theatre company and we wouldn’t be where we are now without them.”

Lake Pontchartrain Beach — “Most people don’t know this and many don’t believe me when I bring it up, but The NOLA Project’s second production ever took place on Lake Pontchartrain Beach, behind UNO’s Research and Technology Building. The area was barricaded off and signs warned of trespassing. Despite this, Andrew Larimer had somehow convinced someone to let us do a play there (although people who saw rehearsing out there kept calling the cops on us). Sidetone for non New Orleanians or young ’uns: There used to be an amusement park on the lake called Pontchartrain Beach behind where UNO is now. Imagine the Jersey Shore with local food and New Orleans-themed attractions. There’s still a piece of the rollercoaster structure not to far from where we did this show. Anyway, the production was an original piece that Andrew wrote and directed, called “Get This Lake Off My House.” It was the summer of 2006 – not even a whole year had passed since Katrina. The script was a modern retelling of Shakespeare’s ‘The Tempest,’ set in post-Katrina New Orleans. Prospero became Nagin, the clowns Trinculo and Stephano became a corrupt police officer and a FEMA operative, and so on and so on.

“The audience sat on the beach and the actors performed with the lake to their backs. At times the script called for us to wade into the water, slowly stepping backwards to give the effect of rising waters. At a time when the wound was still fresh, Andrew knew that people wanted to be entertained — and they were by the show’s hilarious and heart-wrenching moments. We knew they wanted to be entertained because by the last few performances we had more than 100 people a night. The width of the audience became longer and longer every night, spreading far past the actual performance area.

“Funny story: The parking was almost nonexistent, so cast members had to help direct traffic. Those of us playing law enforcement in the play were mistaken for actual law enforcement while doing so. This show was both fun and cathartic and in the most invigorating spaces an actor can ask for.”

The New Orleans Museum of Art’s Great Hall — “Have you been to the New Orleans Museum of Art? No? What’s wrong with you? Go. Go now and then come back and finish reading this. I’ll wait. … Isn’t that big white room you first enter into awesome? That’s the Great Hall, and it’s become home to NOLA Project’s winter productions. Once we decided to do ‘Midsummer’ in NOMA’s Sculpture Garden, we immediately set our sights on what we could do inside the building. With company member James Bartelle directing, we staged a production of ‘Romeo and Juliet’ that starred the museum itself. The evening began with the audience standing outside, facing the museum for the opening Montague v. Capulet brawl. The rest of the play took place in a thrust setup on the floor of the Great Hall with the audience on three sides of the action.

“Audiences experienced the story in front of them, behind them, and above them. And yes, you guessed it, the balcony above was used for the famous Romeo and Juliet balcony scene. It was perfect. Being in a non-traditional performance space presents itself with some fun problems to solve. Since there was no backstage or green room, actors waited in the nearby galleries and exhibits for our cues to enter. Also, the museum lobby has an elevator that was necessary to use in order for actors to enter from different floors. But the elevator dinged every time the doors opened so we had to create a cue sheet for how many times and exactly when the chime could ding during the show.

“It was a challenge experience and an exciting production. We’ve done other shows in the space and our next is ‘The Winter’s Tale,’ which plays for twelve performances in December. Come see it!”

Bonus — “The end of our season, in summer of 2016, we’re doing an original piece written by Andrew Larimer that takes place throughout the New Orleans Central Business District. If you thought the immersive setting of ‘Clown Bar’ or the garden shows were cool, just wait till you see this. It involves multiple locations around downtown and multiple groups of audience members going from place to place to solve puzzles, gather clues, and interact with characters. Truly immersive theatre. More info on our site as it becomes available:www.nolaproject.com.”