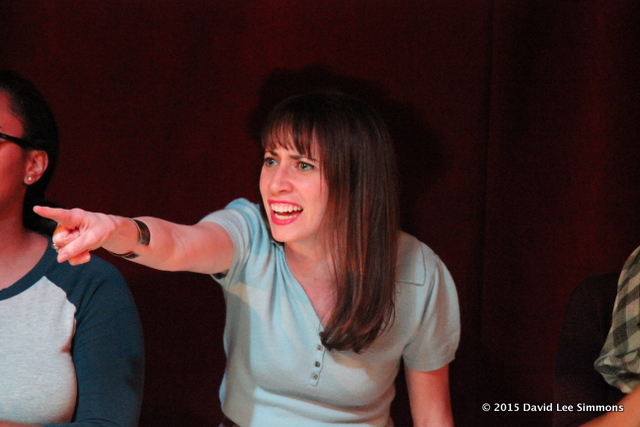 Cecile Monteyne in “You Don’t Know the Half of It.” (Photo by David Lee Simmons)

When I was asked at NOLA.com for ideas for possible 15 entertainers to watch for 2015, one name sprang to mind. It was pretty much a no-brainer: Cecile Monteyne. Actress, comedian, producer — she was becoming a major presence on the New Orleans entertainment scene, especially with her work with The NOLA Project and in the comedy world with machine A and especially her seasonal “You Don’t Know the Half of It” improv sketch show. I reviewed the show’s October 2015 show here.

(But first, an aside: There was another NOLA Project figure who, in hindsight, should’ve been considered. A.J. Allegra, The NOLA Project’s artistic director, is seemingly everywhere in New Orleans, acting and directing with the troupe, teaching theater to kids, and even appearing with the LPO. He is very much someone to watch.)

Monteyne and the “You Don’t Know the Half of It” crew marks four years on Sunday (Jan. 17) with a special show at Le Petit, and I profiled that in the New Orleans Advocate. And what I tried to drive home in the piece is how Monteyne — clearly a special talent and presence — often is at her best when trying to make everyone else look good:

When someone’s having a good night, it’s partly because you’re helping them have a good night,” the Tulane grad said. “It helps to work with other funny people or other straight people who can play that cold fish who doesn’t have to respond. I think comedy is at its best when everybody is working together to make one another look funny.

Her 2015 was as good as promised, highlighted by being named the Big Easy Entertainment Awards’ entertainer of the year. (She’d received acting nominations for performances in a drama and a comedy.) And later she delivered what will for sure be another nominated performance in The NOLA Project’s “Marie Antoinette.”

What’s really cool about Monteyne these days is the production she recently wrapped with her brother Jules Monteyne on “One Night Stand Off,” a romantic comedy in directed and co-written by Jules and Cecile, and starring opposite Ian Hoch. I hope to have a lot more about that in the coming days. But until then, go to Le Petit on Sunday and see what all the fuss is about.