Jim Fitzmorris in “Be a New Orleanian” 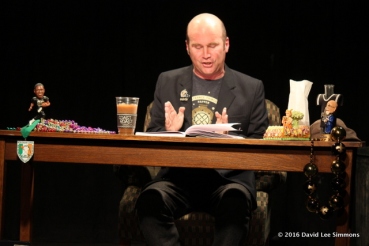 It’s only fitting that Jim Fitzmorris’ brilliant “Be a New Orleanian” one-man show now comes in booklet form, courtesy Dirty Coast. After all, Fitzmorris’ treatise on what makes one a citizen of the Big Easy — especially in the post-Katrina world of “New New Orleans” — is an instructional manual as much as it is a manifesto.

But it’s also because of Fitzmorris himself. Arguably the city’s most important playwright expounding on the city itself, Fitzmorris as both writer and performer comes at his audience with machine-gun ferocity, spitting out paragraphs of parables. In verbal form, at times they feel almost free of punctuation. He knows how to pack a lot of insight, humor and reflection in his one-hour show currently enjoying a remount at his new Theatre at St. Claude space (the old Marigny Theatre) behind the AllWays Lounge on St. Claude Avenue.

He premiered the piece in time for the 10-year anniversary of Katrina last August, which was fitting for many and garnered great reviews from NOLA.com | The Times-Picayune’s Ted Mahne and Gambit’s Tyler Gillespie. As someone who’d already burned out of both reading and creating 10th anniversary stories (and already filled with anxieties that a couple weeks later came home to roost), I’d consciously avoided anything with a whiff of the flood, and while I felt a twinge of regret at the time, I’d argue that now is an even better time to see this show. The show crystallizes every conflicting emotion about living in New Orleans … and, in my case, returning to New Orleans, for better and worse.

New Orleans now enters its even more uncertain post-post-Katrina period, one in which the recovery money and tax incentives are starting to dwindle, the media’s packed up its vans, and legacy of a Bobby Jindal governorship suggests a looming recession. If you want stormy weather, the city might be heading into it once again, and so Fitzmorris’ perspective is needed more than ever.

As other reviewers have astutely pointed out, Fitzmorris, despite possessing a razor-sharp wit, often has a bark worse than his bite. He can be pointed in his criticism and blunt in his tone, but “Be a New Orleanian” (subtitled “A Swearing In Ceremony”) is as much a love letter to his hometown as it is a cautionary to those who think they “get” the city but don’t, and maybe never will. Maybe that’s because Fitzmorris, like many, have tired of the vitriol aimed at the carpetbaggers and gentrifiers and going-native types who have flooded the city since the flood. In a city filled with so much love, why hate?

It’s cleverly structured around six basic tips, starting with the most timely in which he clearly distinguishes between the actual New Orleans and “N’Awlins,” with all its post-K perils, and divided into two suburbs: “Sadsaxophoneville” and “Spookyvoodooland.” The former suburb is what hit me right in the gut and the funny bone:

This is the place that provides generic N’Awlins background music for NPR. It is a particular favorite for the sort of people who consider Ira Glass, Terry Gross and Garrison Keillor as their holy trinity. When you step into Sadsaxophoneland, you will see an old saxophone player under a street lamp playing a soulful tune and occasionally stopping to say even more soulful things like … ‘Once you get inside N’Awlins, N’Awlins gets inside of you.”

Then there’s Spookyvoodland, which is just as rife with cliché:

Spookyvoodland has Congo Drums, and Skeleton Keys, and Angel Hearts, and moon glowed cities of the dead, and endless nights, and fortune tellers, and psychics whose gifts have driven them so mad they choose to help honeymooners from Scranton, Pennsylvania rather than play the stock market … Spookyvoodooland is filled with anyone who has ever sharpened their teeth and gone looking for a front row seat for the 15-round battle between the top-hatted Papa Laba and The Lou Garou in a loser-leave-town match.”

For sure, “Be a New Orleanian” suggests at times a New Orleans culture — however defined — under siege, and some of Fitzmorris’ anecdotes ring true to the teller. He delivers them on a spare stage, often getting up from behind his table (surrounded by New Orleans trinkets and iconography) to tell his stories. In pointing out the “New Orleans Linger,” he conjures the story of a Dorignac’s cashier who takes her sweet time ringing up two polar-opposite customers. One’s an aging, sweet-natured local who’s happier to chat than get through the line, and the one (behind her) is an impatient hipster rolling his eyes at the pair’s extended exchange. The cashier sizes up the temperament of both, and takes her sweet time checking out both customers — one out of love, the other out of spite.

“(I)f you take the linger out of New Orleans, you take its smile along with it,” he says. “And you turn us into a version of Atlanta with better food and more mosquitos.”

As someone who lived for seven years in Atlanta after moving from New Orleans, only to return a couple years ago, I felt that familiar twinge of defensiveness about living in the Crescent City’s favorite rival city and punching bag. The Atlanta I came to know and ultimately appreciate is a little better than perceived from a distance, but, really, its only crime was not being New Orleans. Whether driving around the city or interviewing New Orleans authors I’d coaxed to the Decatur Book Festival, I’d kept near me that sliver of a bumper sticker that read, “Be a New Orleanian. Wherever You Are.” For seven years, I knew what it means to miss New Orleans.

But the return to the city, despite years of visits back with friends and family and familiar and new spots, felt like a crash landing and at times felt like a strange new world all over again. I wondered, for a second time, if I had any right to call myself a New Orleanian. It reminded me of a commentary I’d penned for Gambit (Weekly, thank you) when I was the managing editor after Katrina, titled “So Long … For Now.” Among other things, I pondered what effect staying to help rebuild the city would affect us as others left, not realizing at the time I would fit in both categories:

I’ve often thought about how, because of New Orleans’ sometimes provincial nature — where natives are polite but sometimes leery of transplants — non-natives have to qualify for special pins to mark the time they’ve put in here. You know, like Alcoholics Anonymous members. Now, I fear another caste system is already developing. Those who stayed through the storms will be the proudest, followed by those who returned within days, then within weeks, and then months. And we will all revel in our pride for being the brave frontier folk who stayed to fight the good fight, to rebuild the city. And then, when our friends return, when the city is in better shape — when the stink blows away, the debris clears up, the services return to normal, even homes become inhabitable — we’ll resent them.”

But in “Be a New Orleanian,” Fitzmorris takes complex emotions like these and remains gleefully positive. His basic point: If you come here and try to make New Orleans a better place without taking away that which makes it unique, you will fit in just fine.

The show ends with the suggested swearing-in ceremony. I’d planned not to participate, partly out of a critic’s objectivity, partly out of desire not to seem presumptuous or pretentious. But as everybody else in the audience rose, I couldn’t help but join in the fun.

Now it’s official. The bumper sticker is now a book, and a way of life. Thanks, Jim.