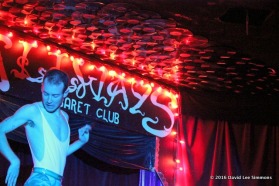 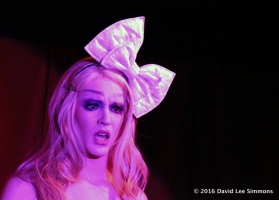 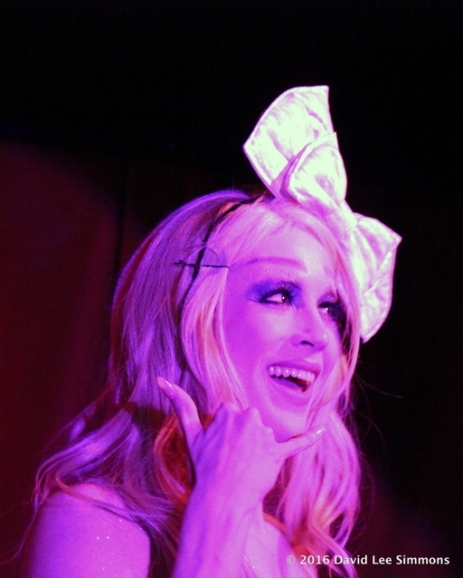 As part of a series we’ll call “Exit Interview,” I’m cleaning out the reporter’s notebook from my coverage of Vinsantos’ New Orleans Drag Workshop Cycle 4 Draguation (for PopSmart NOLA, including a look at the rehearsal and show, and for the New Orleans Advocate), starting with thoughts from Cory Greenwaldt — aka Slenderella. Slenderella makes her professional debut Friday (May 27) in the “Dollhouse Revue” show at the Golden Lantern in the French Quarter. Here, in his own words, Greenwaldt discusses how he came to the workshop and his drag persona:

“Draguation night was one of the most liberating nights of my life. I’d have to say that it was on par with taking my final exams during my last semester of university. We spent two months constructing these drag personas and acts, with the help of Vinsantos, all for one special performance for our families, friends and fellow drag lovers. I wouldn’t trade that experience for anything … however, I do wish the air conditioner was on full blast. We were melting backstage.

“Not only did the Drag Workshop provide a positive space to expand our creative minds, but it also gave us a networking platform. The class had such a diverse crew of talented people. Whether they were experienced performers, makeup artists, body painters, costumers, sound engineers … everyone brought something to the table. I learned valuable tips of the trade and how to properly communicate with future promoters, event coordinators, which in turn will help me with my future gigs/performances. I basically owe everything to our Headmistress Vinsantos DeFonte!

“He would probably snicker if he heard my say this, but he really was an inspiration to us all, which is why I wanted my performance to reflect that. At times during my number, I found myself giving him most of the attention rather than the crowd. He was front and center with the biggest smile on his face and I couldn’t help but show him how grateful I was. He’s one of the most talented artists in the New Orleans community, and I’m incredibly grateful for the time and effort he put into this. I can’t imagine the patience it took to get a bunch of artists to finish things on time!

“The character Slenderella is a play on how skinny, and well, slender I am. I used to be very self-conscious about my slender frame, which is why I wanted to use Slenderella to help me feel comfortable in my own skin. However, she really is an extension of my personality. Silly, bubbly, a bit ditzy, and a laugh you can hear a mile away. I chose to do the song ‘Primadonna’ by Marina in the Diamonds because it perfectly represents Slenderella (and myself) as a whole. It truly represented my inner need to be perfect in an imperfect world — which can be dangerous at times. I’ve learned through the creation of Slenderella and the Drag Workshop that not everything is perfect, and at times, I just need to loosen up and have fun!

“Prior to the workshop I studied art history and architecture through the University of New Orleans and Charles University (Univerzita Karlova v Praze) with a concentration in Central and Eastern European art and architecture. I finished my studies and graduated with a bachelor’s degree in fine aArts on December 18, 2015. In all honesty, I wanted to do the workshop in order to find a creative outlet for myself. I’ve always had a passion for the arts but never really found an avenue that best suited my creative abilities. Drag became a way to express my inner creativity and personality through a developed persona, while earning some dollar bills. It turned into a way for me to create a living piece of art and become a fierce drag performer.”