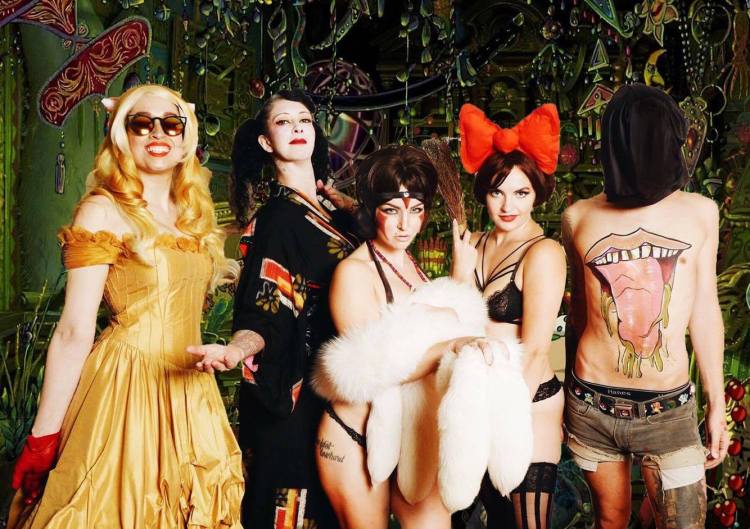 The Society of Sin long has trafficked in pop-culture homage that taps into such familiar territory as comic books (“Arkham ASSylum: A Batman Burlesque Play”) and TV game shows (“The Vice Is Right”). But with “Howl’s Twirling Tassels,” this nerdlesque troupe explores pop culture in a very different, and potentially more vivid, way in its tribute to Hayao Miyazaki. The legendary Japanese anime director and his Studio Ghibli crafted critically acclaimed movies for decades before stunning American audiences with the 2001 release of “Spirited Away” — which won an Academy Award for Best Animated Feature and helped audiences take a second look at previous releases such as “Princess Mononoke” and preceded the 2004 Academy Award-nominated “Howl’s Moving Castle.”

Miyazaki’s films work against many of the narrative and visual styles to which American audiences are generally accustomed to, unafraid to explore dark, even adult themes with fluid, sometimes languid rhythms and pulsating images. They often feature strong female protagonists, one of many reasons they are a fitting inspiration for The Society of Sin. On the eve of Friday’s performance, producer-performer Xena Zeit-Geist offers her five favorite Miyazaki films.

“Princess Mononoke” (1997) — “Princess Mononoke” was the first of Hayao Miyazaki’s films that I ever saw, so it will always hold the most special place in my heart. I remember picking it out from the video rental store during a weekend with my dad because of the wolf on the cover (I was obsessed with dogs and wolves as a child) and immediately being hooked. Rewatching the movie as an adult, the moral ambiguity of the film continues to fascinate me. I love stories where there’s a clear conflict but it’s not cut-and-dry good vs. evil, like the San vs. Eboshi conflict in “Princess Mononoke.” Lady Eboshi is the antagonist of the story, but she’s an incredibly strong, inspirational leader who does what she feels is best for mankind, no matter the stakes, and Ashitaka clearly has a lot of respect for her. She’s the first female character that I remember seeing portrayed as a benevolent, competent ruler in a children’s movie and one of the first “villains” who wasn’t straight-up evil. From the first time that I saw the film, I admired Lady Eboshi, even though I ultimately sided with San. At the time that I first watched “Princess Mononoke,” I strongly preferred the company of animals to the company of humans and was really banking on finding out I was an Anamorph (or at least realizing my ability to converse with animals like Eliza Thornberry) before I got too old so that I could go live in the wild and not deal with people anymore. I may have related to San’s anti-human self-loathing on a deeper level than most of my peers at the time. (Side note: I’m still secretly sort of upset that I still have no idea what my cat is saying the majority of the time.)

“Howl’s Moving Castle” (2004) — I read an interview of Hayao Miyazaki where he actually named Howl’s Moving Castle as his favorite of his creations, and I think that this is where his passion for filmmaking really shines. Miyazaki was open about his rage over the war in Iraq, which partially inspired the pacifist themes of “Howl’s Moving Castle,” but his strong opinions never come off as heavy-handed or preachy; it’s even easy to get swept up in the sweet, whimsical side of the plot. However, the film still manages to tackle a plethora of complex issues — depicting the atrocities of war, championing the message that life is worth living at any age, and, once again, illustrating that sometimes conflicts are more complex than good vs. evil and that even those who might be considered villains are capable of positive change, introspection and personal growth. Plus, there just really aren’t enough movies with badass little old ladies as lead characters, and Miyazaki’s portrayal of Sophie makes getting old seem pretty awesome.

“My Neighbor Totoro” (1988) — “My Neighbor Totoro” is one of the strangest, most imaginative stories I know of, and therefore one of my favorites. From the soot sprites, to the cat bus, to Totoro himself, Miyazaki creates a cast of fantastical, yet somehow oddly believable, characters in this heartwarming adventure. The cat bus is probably my favorite thing about the movie. I just rewatched this one with my roommates, who’d never seen it before, and it was getting to the part where Mei and Satsuki are waiting at the bus stop with Totoro, and then it’s Cat Bus that rolls up — such a strange and pleasantly unexpected creature. We all just laughed and marveled at the strange way that she moves with her little caterpillar legs. (I always imagine that the cat bus is a lady, even though I don’t think that cat buses actually abide by the gender binary.) When Loretta Dean mentioned wanting to do a Cat Bus-themed burlesque act, I was over the moon with anticipation! I believe the soot sprites will make an appearance, as well, and am told that her act will contain some audience interaction.

“Spirited Away” (2001) — As a kid who obsessed over books and movies like “Alice In Wonderland” and “The Wonderful Wizard of Oz,” I was absolutely smitten the first time I saw “Spirited Away.” Another masterpiece in imaginative storytelling, “Spirited Away” immediately swept me up in its dazzling and dark fairytale world. Like the strange, fantastical creatures in “My Neighbor Totoro,” the inhabitants of the film’s spirit world fascinated me to the point that I’d find myself my own versions of No-Face monsters and pig people and thinking of little backstories for them. It’s also an excellent examination of the effects of capitalism and consumerism; once again, Studio Ghibli manages to explore extremely complex, grown-up themes in a film made to appeal to young people without sacrificing story or watering anything down.

“Kiki’s Delivery Service” (1989) — While some might argue that “Kiki’s Delivery Service” in some ways lacks the complex conflict and fantastical drama the makes so many of Miyazaki’s other films remarkable, it’s an endearing film with a lot of heart and one of my favorites. The film centers on a 13-year-old witch-in-training who’s transitioning into adulthood and getting her bearings as a practitioner of magic. Unlike so many Studio Ghibli films, “Kiki’s Delivery Service” does not delve into a morally ambiguous conflict between external forces but instead makes an antagonist out of the title character’s own self-doubt. In the film, Miyazaki does an expert job telling the story of a compassionate, resilient young woman who learns the value and power of her own vulnerability. This will always be one of my favorite movies to re-watch as someone who regularly battles villains such as “Imposter Syndrome” and fear of failure (as so many artists do). Kiki teaches one of the most important lessons someone interested in harnessing the magic inside them can learn: To be the best witch you can be, you have to find a reason to get right back on your broom, even after a big fall, even when no one understands (not even your cat), even when you’re not totally sure that you can fly. This is the only way to experience true triumph.