Melissa Weber, as DJ Soul Sister, has been that rare New Orleans musical artist, connecting the dots between New Orleans music to the rest of the nation in her never-ending passion to expose audiences to the deepest cuts and the rarest grooves of funk music — without ever lifting an instrument. That is, of course, if you don’t consider a turntable an instrument.

Whether as the host of WWOZ’s “Soul Power” or her “Hustle” shows at the Hi-Ho Lounge, DJ Soul Sister goes far beyond the obvious stars and hits of the genre and digs a little deeper, but always keeping the party going. Her star power has grown over the past decade to the point where she’s become a presence at festivals more known for live music, and to the point where her annual Birthday Jam has become one of the early highlights of the fall music season

On this, the eve of her 10th Annual Birthday Jam — featuring the Chuck Brown Band, backing musicians for the late go-go legend out of Washington, D.C. — we asked DJ Soul Sister for the artists, living or dead, she’d love to have on the guest list.

Chuck Brown — This is an obvious choice but, as the “Godfather” and creator of the go-go sound of Washington, D.C., that I’m dedicating my party to, he will be present in spirit. Like my Birthday Jam last year, I’m having a huge specialty birthday cake created that everyone can enjoy. I was gonna keep it a secret, but I’m too excited to hold it in any longer. This year’s cake, created by Dat Cake Place, will include 100-percent edible conga drums with a painting (again, edible) of Chuck Brown. He’s got his own lottery tickets, memorial park, statue … now he’ll be on a cake! Seriously, this is how much Chuck Brown is loved, and his music and style is so influential to me. I’m thrilled that his band (the Chuck Brown Band) and all of the other go-go bands and musicians in the D.C. area keep his sound alive some 40 years after he started it.

Questlove — Being that Questlove is the music lover’s ultimate music-loving artist/performer/historian/critic/writer/badass that I aspire to be when I grow up, it only makes sense that I’d invite him. Besides, any serious lover of funk music can’t resist D.C. go-go, and I know he loves it. Several years ago, I opened for The Roots at a concert in the New Orleans Main Library on Loyola, of all places. One of the songs I mixed in my set, as it came to a close, was a go-go cut called “4th Gear” by Trouble Funk (1983). When The Roots took the stage, Questlove incorporated that go-go beat in the intro. I was jumping up and down. 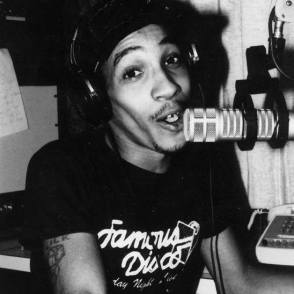 Slick Leo of New Orleans — I’ve been talking a lot about DJ Slick Leo lately, but he is such an influence on me, even though I was pretty young when I was really exposed to him. I was too young to go see him play at the Famous Disco or places like that. But I learned about Washington, D.C. go-go music from his live on-air mixes on the long-defunct WAIL 105 FM in the mid 1980s. The station regularly had this music in rotation, songs like “Meet Me at the Go-Go” by Hot, Cold Sweat and “Let’s Get Small” by Trouble Funk. I never forgot that sound and how much I loved it, so I credit him with introducing me to go-go. Thanks to him, and my love of funk music, I’ve developed a lifelong appreciation of the music and culture of D.C. go-go, and I just want to share it with others — just like he shared it with me. People should know that he’s a legendary music figure in this city, and the fact that we can trace many New Orleanians’ knowledge of D.C. go-go directly to him is one of the reasons why.

Teena Marie — “Lady T” is my favorite female vocalist of all time, hands down. I’ve just loved her my whole life, since I was very young. It’s hilarious that I had no idea she was white until I was approaching high school. She’s one of the most soulful vocalists of all time. I opened for her a few times, but was scared to death to meet her. I don’t get very star-struck, but she’s someone I just viewed as untouchable. But, funny enough, in the months prior to her passing, we became Twitter friends — out of the blue! Like, she started following me, and we’d chat back and forth about music. And sometimes she’d DM (direct message) me, too. It was all about our appreciation of music — Linda Lewis, Linda Jones, New Birth, you name it. She loved and knew her music. After all of this communication transpired, I always thought we’d have a great time meeting in person. I do think she’d love D.C. go-go music, especially since she also played congas, which is a key instrument in the go-go sound. Plus, she loved New Orleans so much.

Read more: Check out Keith Spera’s article on the event in the New Orleans Advocate.