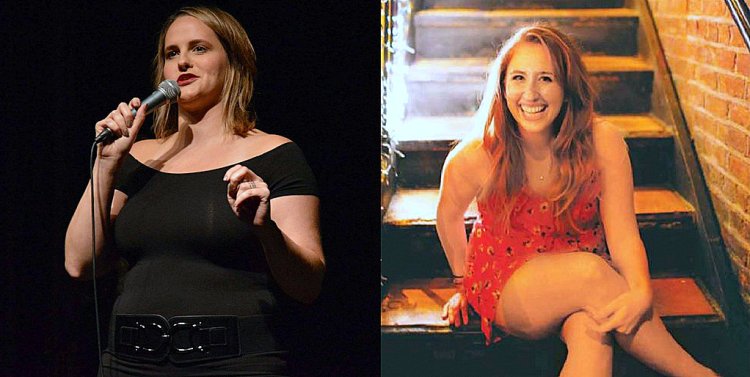 INFO:
“VICTORY FOR T&A: From the Women of Sick Girl of Screw You Cancer”
WHAT: In this show of two comedians, New Orleans’ Katie East (Sick Girl) and New York’s Caitlin Brodnick (Screw You Cancer) put a humorous spin on their respective battles with illness
WHEN: Sat. (Nov. 19), 8 p.m.; Sun. (Nov. 20), 2 p.m.
WHERE: The Theatre at St. Claude, 2240 St. Claude Ave.
TICKETS: $20
MORE INFO: Visit the Facebook event page

As a decidedly defiant dynamic duo, New Orleans’ Katie East and New York City’s Caitlin Brodnick have decided not to take their respective battles with cancer sitting down. In fact, they have no problem name-checking the sources of their illness in their comedy show “Victory for T&A.” Faced with a history in her family of breast cancer, Brodnick boldly decided to opt for a preventative double mastectomy in her 20s — and even had Glamour document the experience on a web series, “Screw You Cancer.”

East has been beset by a range of illnesses and more hardship, including bad surgical experiences and the discovery of cancer in her buttocks — hence the “T&A” of the title. And so she has turned her experiences into what she’s calling a “Coney Island-style freak show.” Here East discusses the show and their shared experiences before Saturday’s opening (Nov. 19).

(NOTE: East and Broadnick will discuss their show as part of a health-care themed episode of “PopSmart NOLA” on Saturday, 3 p.m. to 4 p.m., at WHIV (102.3 FM). You also can stream the show live

Trace as best you can your health issues — when they started, what they were, and how they progressed over the years?
I’ve had so many! When I was 7, I had a severe kidney infection and ended up in the hospital for a week. I was so dehydrated they couldn’t get an IV started. It took like thirtysomething tries over 24 hours. I had four major concussions before I was 10, which led to scar tissue in my frontal lobe. (Maybe why I’m a comic? No filter). I broke my pelvis in middle school while doing a split. In high school, I had a urethral diverticulum that they said was so large it was only “commonly seen in men over the age of 80.” When I was 20, I got malignant melanoma on my butt, a place never seen by the sun. And two years ago they found a non-malignant tumor on my liver.

It sounds like “getting sick” was only one part of the problem, that you not only suffered from unusual illnesses but also that medical care either failed to help or sometimes exacerbated the situation. How frustrating was this?
A lot of people think doctors are gods. I have had some terrible doctors and I have had some amazing doctors. They are all people, though; they make mistakes. I’ve almost died from some of those mistakes, but I don’t shun the entire profession. My Mom and I have learned that you have to actively do your research. In the end, you’re in charge of your own health, and the doctor’s word is just an opinion. Get many. Finding a good doctor is like dating — shop around and don’t get jaded because there are a lot of terrible ones out there. Yes, it’s expensive; yes, it’s infuriating; and yes, it feels like it should be easier. But, it’s your life, and you have to work for your health.

Where are you now with your health issues? What’s your health status, and where do you see your health moving forward?
It’s all about balance. I hate to sound like Gwyneth Paltrow, but it’s what I strive toward and also struggle with. For the rest of my life, I will have to go to several specialists a year just to make sure I’m healthy. I have come to terms with the fact that doctors are not focused on my wellness. Their job is to make me better when I am sick, by any means necessary. I have to be the one to care about the side effects and keeping myself healthy and my future. Nutrition and mental health and physical activity are all things I focus on and will honestly never listen to a doctor’s opinion on the matter (except maybe mental health, if necessary). I listen to my body and I know what I’m supposed to be doing and when I’m off course.

What inspired you to not only turn this ongoing physical hell into a comedy/cabaret act, and especially with a “freak-show” approach?
In LSU Theatre, we had to do an “auto drama,” which was basically an autobiographical theatrical piece on something important in our lives. I did mine on having cancer just six months after I was diagnosed and a month after I finished treatment. It was a mess. It was so fresh and I was still so traumatized. I’ve worked 11 years to make that mess into a comedy. That’s how I deal with things. I use humor. For years I didn’t talk about having cancer because I hated making people feel uncomfortable or having people feel sorry for me. Now, I talk about it all the time. A lot of my friends kind of abandoned me through the process because it’s just a bummer when a 20-year-old has cancer. A lot of people couldn’t deal with it. I don’t want medical issues to have a stigma or sadness attached to it. I think now I can talk about it in a way that is matter of fact and hopefully will help other people to not run from friends who are dealing with illness.

The freak show idea came about because I think the hardest part for me dealing with my specific illnesses is that they were always bizarre. Doctors had “never seen anything like it” almost every time something happened to me. I have always felt like a freak, even though I look normal to most people. The message of this show is, we are all freaks, even if you can’t always tell at first glance.

How did you meet and collaborate with Caitlin and what was the main strategy to make something so serious so funny?
I met Caitlin in a one-person show class that Becky Drysdale taught in New York City. I already knew I wanted my show to be a freak show, but Caitlin was still trying to find her material. I remember thinking she was the most offbeat comic I ever met. She was so positive and sweet. I would have described her as a sprite of a woman at the time. A couple of years later she was diagnosed with the BRCA gene and she had a docu-series that followed her process of having a preventative double mastectomy. I have a stand-up joke that I hate when people call me brave for having cancer; I didn’t choose to have it. Caitlin chose to confront cancer before it could take her life. I think that’s insanely brave. I don’t think I could have made that choice.

Caitlin has toured around the world speaking about her experience with BRCA, and since she’s a comedian she made it naturally funny. She is a great storyteller. Her smile is infectious and she never puts anyone down to make the joke. When she was here for Hell Yes Fest last year and we were hanging out I convinced her to put together her stories about the experience and make it a show. This is the first time she will be performing it as a full one-person show. We are hoping we’ll be able to bring this to other theaters around the country.